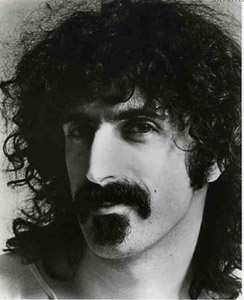 A young Ringo Starr made up to look like the young Frank Zappa is not much of a stretch.

Take the head shot of the Beatles’ drummer that came with the original White Album LP, paste a cheap soul patch under the lower lip and VOILA! – the moptop becomes the mother of all maestros.

But Captain Von Trapp from the Sound of Music as the Devil?

Not just any New Testament demon with village street cred, but Beezulbub himself, here going by the name Rance Muhammitz and played by Theodore Bikel, nominated for a 1959 Tony for his Daddy Von Trapp role in the Broadway staging of the Sound of Music.

Naturally, the Devil appears dressed as an Army general.

These touches of genius (and the immortal Keith Moon as a “hot” nun) are sprinkled throughout 200 Motels, Zappa’s 1971 movie released – along with a double album soundtrack featuring the Royal Philharmonic Orchestra – by United Artists.

Screening at 98 minutes, it’s one of those inexplicable films, which ultimately needed a second movie to explain it: 1989’s The True Story of Frank Zappa’s 200 Motels.

Made for $679,000, 200 Motels is one of the earliest feature films shot on video before transfer to 35mm celluloid for release.

It purports to be a documentary about life on the road, a favorite Zappa subject. Indeed, after the far-too-soon death of the guitarist and composer, his family announced that their patriarch had embarked upon his final tour.

“Touring,” announces Starr as Zappa at the beginning of the film, “can make you crazy.”

Rafael Alvarez is a short story writer and former staff writer for HBO’s “The Wire.”