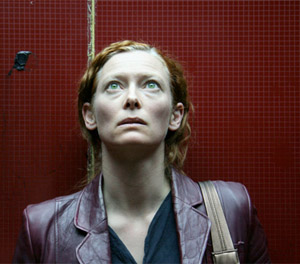 An alcoholic in financial need, Julia (Tilda Swinton) meets Elena (Kate del Castillo), a nervous neighbor, at an AA meeting she’s forced to attend and in turn accepts an offer to kidnap Elena’s son from his wealthy grandfather on the basis of financial reward for herself and a mother-son reunion for Elena. However, Julia twists her own plot, and Elena becomes obsolete. We see Julia then escape to Tijuana with the young Tom (Aidan Gould, destined to become the next “Chunk” à la Goonies), and foil her own criminal plans.

Swinton’s claimed that her character is a woman not in touch with her maternal instinct. Yet this is a terribly inaccurate description – in a motel room, she instructs the half-naked, kidnapped Tom to wash the shit off himself, to drink down all of his water and take the pills that’ll make him feel better, and nurses him with water when he’s collapsed from dehydration in the desert. An odd twist on motherhood, but it’s there through the film’s inconclusive ending. Julia is a woman who’s nurturing despite her hard facade, and even in striving to become a millionaire through her crime, ensures that her subject is well-cared for, just as she, even while living as a criminal, only wishes to be taken care of, her only real goal one of finances.

There’s also a moment that’s uncomfortably Murmur of the Heart, sans intercourse and shared blood, and rather gripping sound editing, used via a deafening rumble of Union Station’s trains, nasal breathing, the click of heels on every floor. The thrill in this thriller, really, is due largely to sound, as well as the film’s final scenes, making it easy to not just to see but experience, alongside Julia, her stress, her confusion, her sensory overload in a city whose language she doesn’t speak. And just as this is the case, it is only when you realize she’s repulsively swaggering or licking her lips, trying so very hard to retain a masculine pride, that you more easily separate yourself from her and notice that she’s in fact Tilda, trying her hand at a woman not uncommon in America.

Julia releases in select theaters May 8.