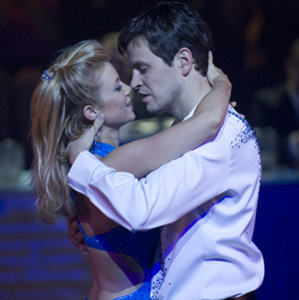 Writer and producer Tom Malloy (The Attic) plays Jake Mitchell, a deaf swing dance champion with lots of insecurities. Although he has won the US Open Swing Competition two years in a row, he does not believe in his movements. Thinking he was given the title out of sympathy for his disability, Jake gives up competing and becomes a dance instructor.

Jessica Donovan, played by Amy Smart (Crank, Just Friends), is a sad English teacher, as described by one of her students. Engaged to Kent (Billy Zane), a money crazed workaholic, she is amazed and rocked when she sees Jake and his former partner Corinne (Nicola Royston) show a few dance moves at the school assembly.

Deciding that she wants to learn swing for her wedding, Jessica signs up for private lessons with Jake. As with any drama about sad, unsatisfied women, after taking a few dance lessons Jessica starts to change. She starts using contacts instead of glasses, wears sexier and more stylish clothing and makeup, does her hair differently and even her body language changes.

Missing the allure of the dance floor and the adrenaline of the competition, Jake convinces Jessica to be his partner for the next US Open, although he believes they don’t have a shot at winning. With all the long hours spent practicing, it is not long before Jake and Jessica want to become partners in other adventures in life.

Although the extraordinary dance moves and fantastic music has the audience craving their own private lessons, the acting is disappointing. In one scene, Jake expresses concern about not being able to connect with their audience and judges. What Robert Iscove, Love N’ Dancing’s director, does not realize is that Malloy and Smart are not able to emotionally connect with their audience and end up coming across as corny and trite.

The conversations and dialogues occur as if the actors are reading from the script. Malloy’s performance is similar to a soap opera actor, with useless facial expressions and unnecessary drama. Furthermore, Jessica’s constant optimism and interest and Jake’s invariable insecurities become annoying after the first few scenes, making the only good thing about this movie, apart from the music and dancing, Caroline Rhea’s performance.