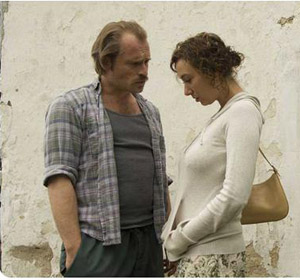 To solve their debts, Alex plots out a one-man bank robbery and invites his Ukrainian prostitute girlfriend, Tamara (Irina Potapenko), along for the ride. When Alex’s quick and simple robbery is unexpectedly interrupted by a nosy cop (Lust), leading to the accidental shooting death of Tamara, Alex has to simultaneously execute a life of quiet identity to protect himself while deciding whether to seek revanche, retaliation, on the cop who’s damaged his life by murdering his love.

Along the way to revenge, he gets tangled up with Robert’s wife Susanne (Ursula Strauss), who’s hiding from her own husband that it is his infertility that’s prevented her from getting pregnant. Alex makes his way into Robert’s home via Susanne, but Susanne uses Alex as a way to achieve the pregnancy that Robert cannot offer her. Secrets are kept from all, and Robert is forced to live in guilt, while unaware of how he’s connected to Alex, either through Alex’s connection to Tamara or the rendezvous he’s had with Susanne.

Set in Vienna, Revanche is unmistakably European, foreshadowing not with a wink – the way most American films of this plot would – but with utmost solemnity. And then there’s a marvelous primal quality to the characters, who act on instinct and with sudden movement. From the initial rock thrown solidly into a body of water, which we later find comes from Alex’s arm just after encountering and perhaps finding peace with Robert, to the way Alex shoots off his bed in a reverse-somersault upon Tamara’s arrival, to the realistic love scenes we’re intruding on – all characters are portrayed with human truth here, and there’s nothing glamorous or exaggerated that comes, nor an ending of more than simple acceptance.

Revanche releases in select theaters May 8.