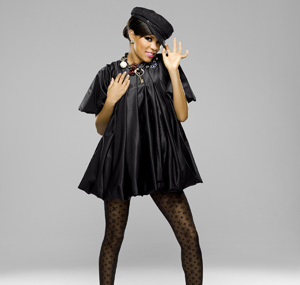 The new album from former Destiny’s Child singer LeToya will be called Lady Love. LeToya earned a platinum certification with her 2006 self-titled debut, and Lady Love will probably garner more precious metal as the album’s first single “Not Anymore” is already racing up the charts.

The song, written and co-produced by Ne-Yo, reaches out to female listeners in particular – it’s about being tired of straying boyfriends. The new album is just one of the projects that LeToya’s been working on lately; she owns and operates two upscale women’s boutiques in Houston called Lady Elle, she’ll be co-starring in the film The Preacher’s Kid releasing this summer and she’s also about to begin pre-production on a comedy for Lionsgate Films.

Magna Carta will be releasing the band’s self-titled debut May 19, and if you wonder what the collaboration might sound like you can preview the entire album at the Ohmphrey MySpace page. If you really like what you hear then you’ll want to check out Ohmphrey in person when they open for the North Indiana All Stars at the Roxy May 14.

Lisa Donnelly: We Had a Thing

She’s not in Kansas anymore! Actually Lisa Donnelly hasn’t lived in her native Sunflower State for quite some time. You might remember the L.A.-based pop singer from her time fronting A.M. Pacific, but now she’s about to release her debut as a solo artist, We Had a Thing.

When asked to describe herself in three words, Donnelly says “Oh! My! God!” but then adds, “I’m comfortable with myself, sometimes to a fault. I’m really outgoing and I’m a little scattered.”

Chances are that Donnelly won’t be scattered at all when she showcases material from the new record at the Roxy May 29. We Had a Thing drops a few days later on June 2.

Christy Hemme is a rocker.

Former WWE diva Christy Hemme has reinvented herself as a rock musician. Hemme has been on the cover of Playboy and is currently a TNA knockout on Spike TV, but her current focus is on her just-released debut EP entitled Where Are You.

The singer has spent the better part of this year trying to heal up after discovering that she had two herniated disks in her neck, and it’s only fitting that the first single from her band (simply called “Hemme”) is called “Don’t Give Up.” You can hear the single and send get-well wishes to Christy at myspace.com/hemmepowered.

Luaka Bop is finally old enough to drink. The imprint, founded by former Talking Heads honcho David Byrne, has turned 21 years old and is celebrating with the May 26 release of a compilation CD called Twenty First Century, Twenty First Year.

The comp boasts 15 cuts that were issued over the past couple of decades by artists like Shuggie Otis, Jorge Ben, Os Mutantes, Tom Ze, Jim White, Susana Baca and of course, David Byrne. The variety of sounds featured on Luaka Bop recordings is so disparate that the label figures they reinvent themselves with every single release, and Byrne humorously says that the label’s staff is “just as confused as you are.”