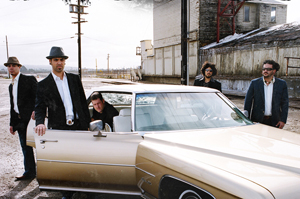 To celebrate their 15-year career, the B*Side Players have released their latest album, Radio*Afro*Mexica.

“It is a balance of different music genres, which all root to Africa,” admits lead vocalist Karlos “Solrak” Paez.

At times, the B*Side Players have received comparisons like War meets Lenny Kravitz by way of Ben Harper.

“We all met in an African-rhythmic class, so we are celebrating our pre-Hispanic culture, such as Azteca and Maya,” Paez indicates. “We are students of music still, and we are studying a lot.”

The charismatic Paez, who also plays guitar, relays that the B*Side Players are a multicultural sounding band.

“This is something that we have always done. We have incorporated different genres in our music,” he adds.

Some of the prominent songs on the album are “Angelita Perdida” (Lost Angel) and “La Bula” (The Boat).

“‘Angelita Perdida’ is regarding a personal experience I had in the past,” Paez says. “For six straight years, the band played nearly 300 concerts a year. It tore my marriage because it became second. So, I lost my love.”

Paez, who is based in San Diego along with the rest of the group, clarifies that he never meant to put this piece out on the record, but that it is a song talking about the process of learning from a lot of pain and suffering.

“Angelita Perdida” is a rather low-key and sand song, but Paez’s vocals are superb. Moreover, the acoustic guitars in the background add a divine flavor that makes the tune complete.

“La Bula,” on the other hand, is an upbeat song describing the group’s experience of when touring in Mazatlán, Sinaloa in Mexico.

“The melody is about a friend and a boat in Mazatlán,” Paez describes. “It is about being on this boat. It also means hello and goodbye.”

The track also mentions how they eat ceviche and drink the local beer Pacifico. In brief, the single makes people want to dance, feeling the presence of live festivity.

Other notable songs are “Refugio” (Shelter), which is a tribute to Paez’s mother and “Poste” (Pole), a story about his grandfather. In addition, “Noche y Dia” is a tune speaking of everything he loves.

“It is cool to be bilingual. We like and strive for diversity. Nowadays, our crowd is both young and old. They are not just Latinos, but all cultures. Our crowds are getting bigger, too,” Paez says humbly.