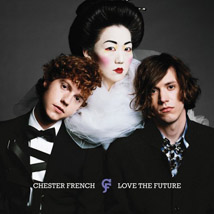 If Chromeo and Rufus Wainwright procreated … they’d likely have horribly disfigured, three-headed hipster dandies as offspring. Luckily, the duo of Chester French prove that if said coupling were to ever happen, it would at least result in some musically gifted monstrosities.

Effortlessly mixing classical orchestral arrangements with an indie rock grittiness, do-it-alls D.A. Wallach and Max Drummey bring in everything from clap-along country folk to classic 1950s rock ’n’ roll to modern hip-hop beats within the disc’s 13-song course. While the songs feel more like a collection of singles at times than a cohesively planned album, each song does take on its own infectious personality, growing increasingly catchier with each listen.

Their strength undoubtedly lies in the more emotive slow-jam tracks that show off Wallach’s vocal range, as with lead single “She Loves Everybody,” but if the Chester French boys can show this kind of artistry on their debut album, we’ll surely be loving what they’ve got in store next.

Love the Future is currently available.