“Die Walküre”: A Unique Production With an Experimental Vision 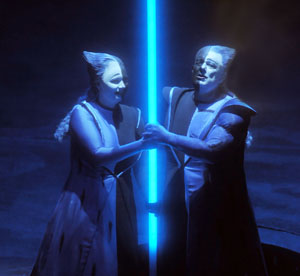 “Die Walküre” recently ended its April run. The German opera is the second part of an operatic teratology called, “The Ring,” which includes four operas, four hours each.

The LA Opera’s version of “Die Walküre” was a unique production with a new and experimental vision, thanks to Achim Freyer’s staging of Richard Wagner’s “Der Ring des Nibelungen.” The light effects Freyer used to accentuate the beauty of the music were beautiful.

Thanks to the new vision, lighting and staging of Wagner’s opera, “Die Walküre” was transformed into an archetypal and mythic performance – free of Wagner’s well-known anti-Semitic views, which typically paint over any viewing of his operas and have made Israelis, Jews and many others avoid ever viewing any of his operas. But this performance was beautiful and could have stood out on its own merit – as a work of art, and therefore, not tainted by the past incarnations of the opera.

The best part of this version of LA Opera’s performance of “Die Walküre” was near the end of the opera, when the Valkyries all sing together and the character of Brünnhilde (a Valkyrie), played wonderfully by Linda Watson, was luminous and fantastic all the way to the end. In addition, for most of the performances the main character of Siegmund was played by the famous Plácido Domingo, but the version with Christopher Ventris (April 22 and 25) was equally enjoyable.

Anyone interested in opera should see if the LA Opera is going to complete “The Ring” and do the third and fourth parts of the teratology.