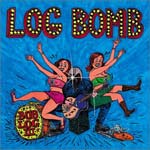 A few things you need to know about Bob Log III: he’s a one-man band, working a bass drum and high hat with his feet while keeping his hands busy on slide guitar (each limb is "introduced" on "One Man Band Boom"). His voice is rendered nearly incomprehensible through a telephone receiver, which is encased in the motorcycle helmet he wears at all times. And what lyrics are decipherable are focused exclusively on strippers and tits and ass, as well as a peculiar custom called "boob scotch" (which is explained––sort of––in "Boob Scotch"). The Tucson, Arizona native’s roots-rock is so blatantly and bluntly horny that it makes Har Mar Superstar look priestly by comparison, but thankfully, it isn’t the only noteworthy aspect of his act. Log (formerly of the primitive roots duo Doo Rag) is an astonishingly nimble guitarist, peeling off molten Delta licks on "Slide Guitar Ride Junior" and Tony Joe White swamp boogie on the title track with equal dexterity and reckless abandon. He’s also got a wickedly warped sense of humor that makes his more childish-perverse side eccentrically charming; who else would tell his right foot to shut up after being introduced, or duet with his dad on kazoo? Not Jon Spencer, that’s for damn sure. Log Bomb is that rare disc that could please blues purists, garage rockers, and basement stoners equally. Figure out where you fit in that lineup and serve yourself up a little boob scotch on the rocks. Grade: A
Article posted on 6/17/2004
This article has been viewed 1603 times.