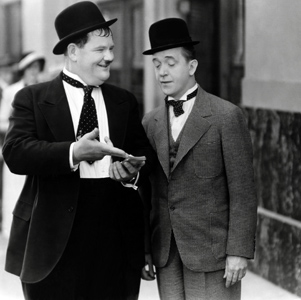 Forget Sin City’s breathtaking CGI or The Graduate’s amazing soundtrack and go back to a time when movies with a sound reel were enough for oohs and ahhs. In a Hollywood desensitized to lifelike movies and three-dimensional playouts, the Hollywood Heritage Museum prefers to keep it old school – like, “100th anniversary of D.W. Griffith’s beginnings as a film director” old school. Or, like tonight, “80th anniversary of Laurel and Hardy’s transition to films with sound” old school.

The Lasky-DeMille barn was originally built on a citrus farm at Selma and Vine streets in 1895. In 1913, it became home base for the Jesse L. Lasky Feature Play Company, which eventually became Paramount Pictures.

As the official site of Hollywood’s first major film company studio, the Lasky-DeMille barn was made a registered landmark in 1956 and – after being purchased by the Hollywood Chamber of Commerce in the ’80s – was moved to its current site and converted into a museum.

Dedicated to preserving Hollywood’s past, the museum has a gallery of black and white photos, a room of rusty film equipment and a Web site documenting their active role in lawsuits and complaints against the city that continues to tear down historical buildings in the name of urban progress. Now sitting on a lot across the street from the Hollywood Bowl, the Hollywood Heritage Museum hosts frequent “Evenings at the Barn,” where the golden age of film is relived in the building that started it all.

Tonight’s program celebrates slapstick comedians Laurel and Hardy’s move from silent films to sound through a screening of four emblematic shorts. With a modern advantage to some historical texts, the schedule includes: Wrong Again, a silent film with a Vitaphone synchronized score that had been lost for decades; Unaccustomed As We Are, their first all-talking short that introduced Laurel’s high-pitched whimper; Men O’ War that sees their sight-gags based on reciprocal destruction routine solidified (watch out for the soda fountain clerk’s Homer Simpson-inspiring exclamation of “D’oh!”); and selections from Spanish-release films where they actually speak Spanish!

Since the Museum’s screening facility is the barn itself, capacity is a little more than 100, but admission is cheaper than at the megaplex and refreshments are free, so arrive early and merry up. The good old days aren’t quite over yet. 7:30 p.m.