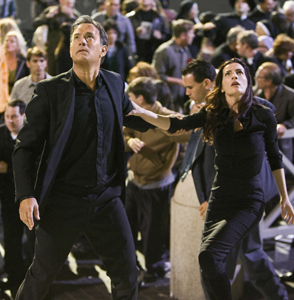 If you don’t know who Dan Brown is, where were you five years ago? His 2003 best-selling novel, The Da Vinci Code, struck a very prominent nerve with readers and became a global phenomenon.

Even though you may not have liked the 2006 feature film adaptation of the latter novel, you may be surprised to find that his far superior book Angels & Demons (which was released two years before The Da Vinci Code) is, likewise, a better film.

Robert Langdon (Tom Hanks) is a Harvard professor and symbologist who already once saved Christianity’s most precious secret. Well, he’s back, folks! This time, it is the Catholic Church that is threatened by its mortal enemy – the Illuminati, an ancient underground secret brotherhood whose mission is to seek revenge for the Church’s past wrongdoings.

The Pope has just passed away, and the Vatican is anxiously awaiting the appointment of the newest head of the Catholic Church. However, a spec of anti-matter (whatever that is) is stolen from a Swiss lab, four Cardinals are kidnapped and the fate of the spiritual city is stuck in limbo.

Prof. Langdon is flown to Rome where he joins forces with Vittoria Vetra (Ayelet Zurer), a beautiful and enigmatic Italian scientist. The duo must follow the 400-year-old Path of Illumination through sealed crypts, deserted cathedrals and perilous catacombs, straight to the heart of the most elusive, secretive vault on earth.

Ewan McGregor and Stellan Skarsgård complete the stellar cast as Camerlengo the Catholic priest and Commander Richter of the police force, respectively.

What Ron Howard didn’t get right at first, he mastered the second time around. Angels & Demons marks the first time Howard has ever returned to a character for a second film, but maybe he should do it more often.

While the first was overdrawn, dialogue-heavy and visual-free, this film is much more invested in telling a story through images. The city of Rome is emphasized, and the director’s appreciation for the endless bounty of art within the city is daunting, though quite spectacular.

Naturally, it would definitely help if you have read the book. However, this adaptation succeeds where the other failed: It does not alienate its viewers, nor does it assume its viewers have read the written counterpart.

This isn’t Die Hard, and Tom Hanks is no Bruce Willis. But Hanks is really fantastic at charming his viewers and telling a compelling story. What more could you ask for?

Angels & Demons releases in theaters May 15.