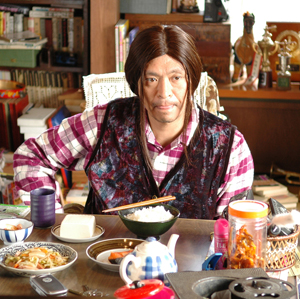 Big Man Japan follows the exploits of a middle-aged man whose job entails being occasionally shocked with electricity that turns him into Dai Nipponjin, a several stories tall behemoth that defends Japan from a variety of giant monsters. Think of Ultraman as a blue-collar worker, and you’re on the right track. Instead of being a revered hero of the people, Dai Nipponjin is reviled as a noisy and destructive oaf.

Big Man Japan is a clever satire, a deconstruction of the Japanese super hero but also a decidedly acute dissection of Japan itself, the influence of American culture and the relationship between Japan, the United States and North Korea. It’s a lot to pack into one movie, but creator/director/star Hitoshi Matsumoto pulls it off without a hitch. Admittedly, if you go into this film with little or no knowledge of the above, then prepare to be baffled at some points, but know that much of the comedy is born out of the characters.

Matsumoto is a renowned Japanese comic, and Big Man Japan is his first feature film. Shot in the style of a documentary, Matsumoto litters the movie with a kind of dry, self-deprecating humor that reminds me very much of Brit comic Ricky Gervais.

Like Gervais, Matsumoto is most interested in the kind of sad, pathetic character that surrounds himself in denial, yearns for entitlement and skirts responsibility. The main character in Big Man Japan, Daisato, is exactly that type of character, a pariah in the eyes of the people he has sworn to protect.

The film shifts style and focus from the understated moments with Daisato to highly absurd comic fantasy featuring giant CGI monsters. The creature designs never fail to amuse and the effects work in service of the story. Monsters range from giant demons to massive hopping legs topped with human heads to skyscraper-sized old men in diapers.

It is possible to come to this movie green and be entertained, though it is definitely skewed towards an audience that is familiar with daikaiju (giant monster) cinema.