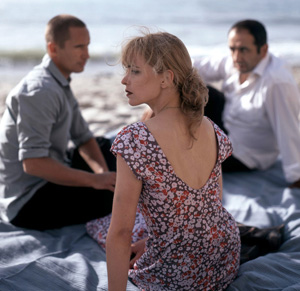 Jerichow begins at a funeral, and within five minutes the main character, Thomas, is lying dead-like on the ground outside his house after being beaten by two random guys, as unrelated non-German foreign music plays. All we know is that Thomas owed them money, and they made sure to get it back. So Thomas heads to the employment office, finds himself a job picking cucumbers and informs the servicewoman that he was dishonorably discharged from serving in Iraq.

As he’s walking home, a car swerves by him playing the same non-German music we heard before and tumbles into a small body of water. Thomas helps the man out, even driving him home so he won’t get a D.U.I.

A few days later, opportunity comes knocking on Thomas’ door in the form of Ali, who has managed to get his license suspended for a year. Ali owns various snack bars throughout the city and needs someone to drive him around each day to stock the stores.

Thomas quickly abandons his cucumber job and takes Ali on, but things get complicated. Ali has a tall, thin, blonde wife, Laura. We actually don’t realize there’s an attraction there until suddenly they are kissing. Things have a knack for happening quickly in this film, yet we don’t really seem to mind.

The rest of the film follows Thomas and Laura as they fall in love in the shadows of Ali’s watchful eye. We can’t turn away as things go from bad to worse – as tends to happen in foreign flicks – yet the ending is oddly, or should I say morbidly, satisfying, if not optimistic.

Jerichow releases in select theaters May 15.