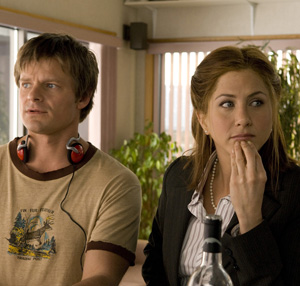 When two lost lonely hearts (Jennifer Aniston, Steve Zahn) meet by chance at a roadside motel, a long-distance relationship ensues with bumps and twists along the road.

Management is more of a “dramedy,” with a meaningful message on the importance of human connection and how timing and fate play such a huge role in life and love.

The always refreshing and entertaining Aniston plays Sue (a hard working woman with a carefully ordered life) to a T. Things start to change when she meets Mike (Zahn), who is stuck in the rut of a mundane existence then falls head over heels for Sue and shakes up her world.

Although the two are “societal misfits,” they seem to complement each other and bring out the best in one another. Mike points out that Sue is “someone who selflessly places other people’s needs before her own.” She wishes to save the world, feed the hungry and recycle with a vengeance, yet is emotionally guarded.

When Mike gets borderline obsessive, she pushes him further away. She scolds him, saying, “We can’t do this ... life isn’t like this.” But Sue’s loneliness and curiosity cause her to rethink their odd relationship.

Like Aniston’s character, so many people in today’s hurried world hide behind their busy lives to avoid any vulnerability and deep commitments.

Much of the dialogue between Zahn and Aniston is touching and poetic. These two comedy maestros shine in a story of growing up, letting go and moving on.

Management releases in theaters May 15.