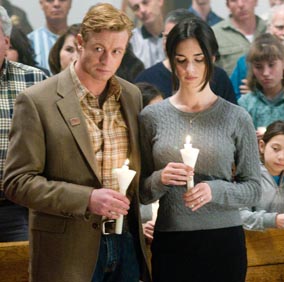 He is the latest Aussie darling to hit American shores and make a huge impact in the process. However, actor Simon Baker’s star fades dramatically in the thriller Not Forgotten.

Baker plays Jack Bishop, an upstanding member of a predominantly Hispanic community in the Southwest. He works at the local Savings and Loan and devotes himself to his second wife, Amaya (Paz Vega), and daughter, Toby (newcomer Chloe Moretz). They live a peaceful happy existence, with the only friction being Toby’s intent to grow up too fast for her 11 years.

One afternoon when Toby disappears from her after school soccer game, Jack and the other parents set off on a search to find her. However, Jack uncovers a few items along the way that are remnants of his freaky-deaky past.

You see, he used to be a real bad ass. Oh, yeah … Jack ran with hookers and drug dealers and all kinds of ne’er-do-wells. He and his wife used to practice a wild and crazy form of Latin voodoo, which makes Santería look like Sunday school. Toby’s kidnapping is clearly connected with Jack’s past – now it’s up to him to find out why and more importantly, to get back his missing daughter.

Baker, who is usually quite charismatic in his roles, is cast all wrong in this part. He just doesn’t have the grit to play a middle class average Joe with a secret. Jack Bishop is a character better suited for someone like Josh Brolin or Kiefer Sutherland – two guys who could accomplish the everyman aspect of the part, while delving into the complexities of the darker plot elements with believability.

While I understand that this is an independent project probably in desperate need of a big name, casting is still imperative. Vega and Baker are two of the sexiest actors working today, but as a couple they lack any real chemistry.

Then, there’s the occult stuff. I love tarot cards, astrology and fortune tellers as much as the next guy, but all the hooey in this movie just made me roll my eyes and sink down in my seat.

I don’t know what was worse: the blind bed-ridden clairvoyant or Jack Bishop’s black magic washroom rituals. It was a very silly portrayal of practices that are deeply spiritual for many people.

Not Forgotten releases in select theaters May 15.