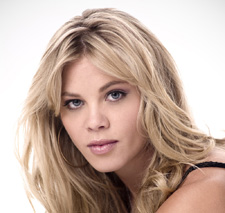 It’s a Hollywood success story come true for Betsy Rue, 25, after moving to Los Angeles from Minnesota a few years ago. As she sat with an actress/girlfriend at a Santa Monica outdoor cafe, a casting director approached Rue, asking her to read for “Days of Our Lives.”

Rue cheerfully quips, “Just like that, I said yes to this offer, booked the job, loved it and got bitten by the acting bug!”

Originally in Los Angeles to pursue a master’s degree in sign language and interpreting at CSUN, Rue’s life has taken a different path, as she devotes 100 percent of her time and energy focusing on acting and keeping on top of her game.

Currently busy at work on the independent film Backstage Pass starring Eric Roberts and Taryn Manning, Rue plays Nikki, the ringleader of groupies of a rock band. The film will premiere at the Cannes Film festival, and Rue feels honored and thrilled to attend.

She will also be seen in some upcoming episodes of “True Blood,” playing Shawnelle, the love interest of Jason. Rue was also a part of My Bloody Valentine with fellow “Days” alum Jensen Ackles and Jaime King.

Rue feels “amazingly blessed and still in awe of how crazy-fast it has all happened!”

“With the pending SAG strike, it’s a really hard time for many actors, since not as many studio films are being written and made,” Rue says.

Still, she feels now is the time to work as a team with her agent and manager and strive to become more well-known in the industry. Some of the big name actors Rue admires most are Anna Faris and Cameron Diaz, since she really loves and appreciates good comedy.

Rue’s life lessons and experience thus far have shaped her philosophy and perspective: “I would just like to say, from my standpoint, if you honestly believe that you will achieve, you will. It might be a rough road, but you will get there and be happy.”

My Bloody Valentine will be available on DVD May 19.