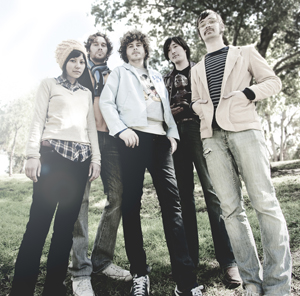 They’re not exactly like Dave Matthews Band or Arcade Fire. They strive to emulate Yes, but you probably wouldn’t guess it from their constant use of violin. What Dusty Rhodes and the River Band are: an enigma in the Orange County music scene.

Unlike its peers, who are predominantly rockabilly or punk, this group has more variety than David Bowie’s hairdos through the years. Led by charismatic frontman and multi-instrumentalist Dustin Apodaca, the River Band continues climbing that proverbial mountain of success with tenacity.

“There’s nothing holding us back, [we] just keep climbing,” Apodaca says. “Depending on where we play, 300 people is a big night. Right now we’re in ‘van and trailer’ status, but it’s temporary.”

They have ambition. It translates in their outlook on the future and what they hope to accomplish in the next year. Ultimately, Apodaca sees the band playing the Honda Center or the Anaheim Convention Center.

“We want to play the biggest hometown gig possible,” Apodaca says. “We want to get there this year.”

His enthusiasm for touring is consistent with his love for composing the tunes on the band’s sophomore release, Palace and Stage.

“I’m surrounded with so much talent, why would I even fight it?” Apodaca says in reference to writing duties within the band.

“[Palace and Stage] is all-inclusive. We all worked on it and built on it from there,” Apodaca shares.

Comprised of Apodaca on vocals and keyboards, Kyle Divine and Edson Choi on guitars and vocals, Andrea Babinski on violin and vocals, Eric Chirco on drums and Brad Babinski on bass, the sextet promotes camaraderie through their ego-deflated band chemistry.

Since their 2007 debut, First You Live, Dusty Rhodes and the River Band have made change their constant aim.

“This new album sounds 10 times better than the last one. The listener would enjoy it more because it gives people something new,” Apodaca points out. “A little change is good.”

Many of the themes on Palace and Stage would not seem like they would be fitting for deep and meaningful songs, but Apodaca proves anything is possible with a little imagination.

“The title track is a perfect example of our blend of politics, video games and an old school love song,” Apodaca says. “It’s my favorite tune.”

In addition to the above themes, other tunes explore vampire love stories and murder mysteries.

“People can relate to the metaphors in any other way, it’s cool,” Apodaca says of the diverse subject matter on Palace and Stage. “We just want it to sound epic.”

Now as the band enters their seventh year together, looking back is only part of the fun of growing up. When Dusty Rhodes and the River Band was born in Fullerton in 2002, it began as a two-piece band with Apodaca and Divine.

Gradually more members were added as some left and others switched instruments. For example, Apodaca at one time only played the accordion, but later switched to vocals and keys. The Babinski siblings and Chirco round out the final additions to the present lineup.

Are there any regrets? Well, maybe just one: the band name.

“You know when you’re 19, you make some bad decisions, and you got to live with them,” Apodaca jokingly admits. “I still kinda dig the name, but not as much as when I was 19.”

Palace and Stage will be available May 19. Dusty Rhodes and the River Band will perform May 21 at the House of Blues Sunset Strip. For more information, visit myspace.com/dustyrhodes.