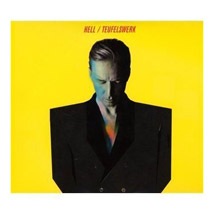 If you know a little bit of German you may know that Teufelswerk translates to “devil’s work.” Combine that with an artist named Hell, and you could figure there’s something sinister going on here. But there isn’t – unless you think techno is evil – DJ Hell’s stage name is derived from the simple fact that his real first name is Helmut.

Teufelswerk is a double-disc package with the first disc (subtitled Night) consisting of fun Teutonic-flavored dance numbers that mostly seem to take their inspiration from the pinging synth rhythm pioneered by disco-era group Hot Butter on their hit instrumental “Popcorn.” The side contains two interesting guest vocal spots: Bryan Ferry sings on “U Can Dance,” a tune that sounds like an Eno remix of Roxy Music, while Diddy adds clipped vocal snippets to “The DJ.”

The second disc, of course entitled Day, is a bit on the trippy side and more concerned with playing with your head than your feet. Hell closes Teufelswerk with an unlikely but very cool interpretation of Hawkwind’s “Silver Machine.”