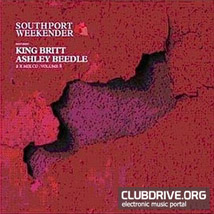 The Southport Weekender series has earned quite a reputation at this point and with good reason; Philadelphia-based DJ and producer King Britt and British house music czar Ashley Beedle are among the most creative mix masters working today.

Vol. 8 features a full disc from each artist, and Beedle shows his love for American soul by starting off his mix with a dismantling of oldie “Walk on By” from the Dells. Beedle gives a similar treatment to “I Can’t Turn Around” by Isaac Hayes, but elsewhere he draws inspiration from a wide variety of acts like Black Ghosts, Crazy P and even X Press 2 featuring Kissing the Pink.