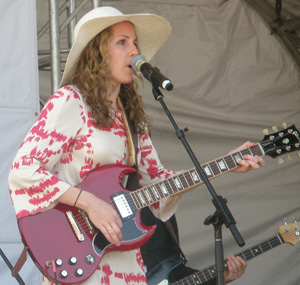 Courtenay Green’s set was a bit what you would expect at noon on a Sunday – a little stiff and dry, but it showed potential.

Green was front-and-center with her guitar, a sun hat and a nice spring dress. Her all-male band mates, including a tuba player, were dressed in casual spring wear, and all had smiles on their faces.

Her set was upbeat and cheerful, and I definitely caught myself tapping my foot more than a few times. She played some nice, light rock. I especially liked a cheerful cover of a 1990 techno number that she did.

Green seemed a little stiff, though, and a little disconnected from her band. It was as if there were some new members, or they had practiced only a few times before going up.

Perhaps it can be blamed entirely on the time slot and location. Sometimes it can be hard to get anything going on a Sunday afternoon, especially rock and roll. I would like to see Green in a smaller venue, with a two-drink minimum, on a Saturday night before I make my final judgment on this female rocker.