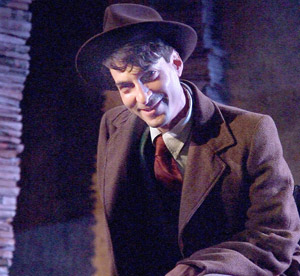 “The Accomplices,” written by NY Times political reporter Bernard Weinraub, is based on the true story of one man’s fight to save European Jewry amidst America’s silence and inaction in opening its doors.

Steven Schub, a lifetime member of the Actor’s Studio, captures the stage and mesmerizes the audience in his role as Peter Bergson, the courageous activist who relentlessly fights to rescue Jews from the Nazis. After his unsuccessful meeting with FDR (Time Winters) and also discouragement from Rabbi Stephen Wise (Malachi Throne), Bergson forges ahead with a public rally at Madison Square Garden, beautifully reenacted on the stage, with the entire ensemble reciting poetic passages and heartfelt readings.

With its authentic historical setting, scenery and costumes and an intense, inspiring plotline, “The Accomplices” is a must-see!