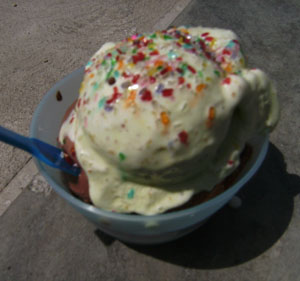 Scoops, located on the hip, little strip of Heliotrope where vegans and bicycle enthusiasts hang out, is notorious for its bizarre flavors, many of them vegan-friendly. Yelp reviewers will break them down for you religiously, but owner Tai Kim isn’t down with all the hype; he just wants to serve up good ice cream.

That he does, with ingenious concoctions such as brown bread, salty white chocolate and maple hazelnut.

I tried the brown bread, a rare staple on the menu, and was surprised by how OK it tasted. The only “bready” part is really the topping. I also tried the lemongrass vanilla, which was refreshing but didn’t knock my socks off. I was tempted to go with something, well, normal, like Oreo cheesecake, but I ended up ordering the strawberry balsamic, another menu staple and fan favorite. My taste buds didn’t quite know what to do with it, but I enjoyed it; it was like regular strawberry but with a tinge of vinegary tartness.

I had gone in expecting Thai iced tea and lavender flavors, which I had drooled over on Yelp, and was a little disappointed not to find them. With Scoops, you just have to go in with an open mind and experiment because the flavors are constantly in rotation.

Did I mention you can make a shake out of any flavor? Yeah, I had heard about an apple pie shake…

One thing’s for certain: they have great service. Every time I’ve visited, there’s been a guy with a handlebar mustache and an affinity for wearing stripes and Capri pants who calls me darlin’ and asks me and my companion, “What can I get you two punk rockers?” Anyone who calls me a punk rocker gets five stars in my book.