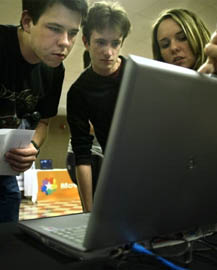 Universities are finding themselves trapped at the center of a bitter battle over bandwidth – caught between the entertainment industry’s crusade to end copyright piracy and tech-savvy students’ casual sharing of songs and movies.

The competing interests converged at a Digital Expo at Washington University, bringing together representatives from entertainment and technology with seven companies that market "peer-to-peer" file-sharing networks to colleges. The goal of the vendor fair and panel discussion was to educate students about legal alternatives to trading copyrighted materials.

"I don’t want to pay to download songs. If I really like something, I’ll just buy the CD," said Scott Abrahams, 19, of Northbrook, Ill., a sophomore who estimated that he has collected thousands of digital music files on his computer – a playlist long enough to run for two weeks nonstop.

Students said the perception is that there’s little risk of getting caught downloading copyrighted music and movies (they call it "ripping" or "burning") online. Some said they would be more willing to pay if their schools made it cheap and convenient.

"If (the university) were to sponsor something, I think it would make it more of an approachable option for us," said senior Jeffrey Dorr, 21, a senior pre-medical student from Miami.

That’s what some schools, including Washington University and the University of Missouri at Columbia, are doing. They seek to weed out illegal sharing by arranging deals with a bevy of new digital wholesalers licensed to provide libraries of digital music and movies to colleges.

Recording and film industry representatives at the event said they embrace innovation and encourage technology companies to pursue legal alternatives to Internet piracy.

On March 29, the U.S. Supreme Court heard arguments in the closely watched Metro-Goldwyn-Mayer Studios Inc. v. Grokster Ltd. case, a test of whether copyright holders can sue digital file-sharing networks that allow people to freely download and distribute songs and movies. A ruling is expected this summer.

Technology companies fear that a ruling for the studios could stifle innovations, such as digital television recorders and music players. In the past, lower courts have said that technology companies cannot be held liable for how customers use their products, even if it’s illegal.

"In the dorms, you’ve got kids who love music, kids who understand technology on a regular basis and kids who have access to high bandwidth," said Jonathan Whitehead, 37, a Washington lawyer representing the Recording Industry Association of America. "It’s sort of like a perfect storm."

It is no coincidence, Whitehead said, that the industry has seen a 22 percent drop in record sales since the file-sharing program Napster hit the market in 1999.

Research suggests that fee-based digital downloading is growing in popularity. A survey released last month by the Pew Internet & American Life Project said about 36 million Americans – an estimated 27 percent of all Internet users – have downloaded music or video files. The survey also showed that the percentage of Internet users who have paid to download music has increased by 4 percent since January.

A one-month survey released in February by the consumer research firm Ipsos-Insight said nearly half of American downloaders 12 years and older, or 24 million Americans, had paid to download music.

So far, at least 45 colleges and universities have signed deals with file-sharing companies. By subscribing, students benefit from discounted rates and don’t have to worry about breaking the law. Schools save money on the cost of bandwidth – the speed of data traveling over the Internet – by storing digital content on campus computer servers. Schools also save time otherwise spent investigating complaints from the record and film industries.

The file-sharing programs vary slightly, but most charge monthly fees for unlimited access to millions of songs and movies from major producers. Some schools pass on the cost by including subscriptions in their fees. Washington University and Mizzou say they are exploring both options.

"It’s so hard to go from not paying to paying," said Ben Rapaport, 20, a Washington University sophomore from Scarsdale, N.Y., who has collected about 8,000 songs on his computer.

Whoever the Supreme Court says is responsible in the showdown between entertainment and technology, universities will likely try to keep tempo with a culture of digital diehards high on bandwidth.

"I don’t think they’ll ever be able to get rid of file sharing," said John Klacsmann, 20, a Washington University sophomore from Augusta, Ga. "They’ll never be able to shut it down."