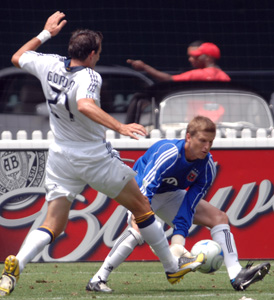 A two-game road trip proved to be somewhat successful for the Galaxy, who earned two ties and did not experience a defeat. The Galaxy managed a 2-2 draw at Real Salt Lake in Utah May 6 before gaining a 1-1 tie in Seattle on Mother’s Day.

For the match in Utah, forward Landon Donovan and midfielder Mike Magee each scored after the Galaxy was down 1-0.

Against the Seattle FC Sounders, forward Alan Gordon netted his second goal of the season in helping the visitors attain the crucial one-score draw.

“It’s bittersweet. It’s good to get a point on the road. But with a chance like this, you need to get three points,” Gordon told Yahoo Sports. “Especially when you’re up a man. That being said, we played well and got a point.”

Los Angeles is now in sole possession of sixth place with nine points. They currently have a six-game unbeaten streak.