Choppy Waters: Play gets rough in the second round. 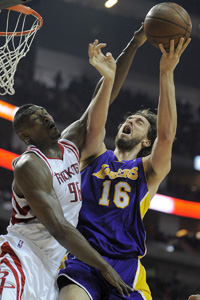 Physical intensity has definitely increased during the semifinals. Technical and flagrant fouls abound, as the aggression of every team heightens.

“It’s the playoffs, this is what it’s about,” the Lakers’ Kobe Bryant told reporters after game two May 6.

Although his team glided past the Rockets in that game as well as in game three of the Western Semis, game four was a completely different story.

Their 111-98 victory at Staples May 6 tied the series at one game each, but they lost starting point guard Derek Fisher in the process. Fisher was suspended for game three after a hard hit on the Rockets’ Luis Scola (Both teams combined for five technicals and two ejections.).

The excitement continued in Houston Friday. Jordan Farmar made a great start in place of Fisher and finished the game with 12 points, seven assists and two steals. Ron Artest was called for a flagrant foul on Pau Gasol in the final minute and was ejected again as the Lakers won 108-94.

Houston center Yao Ming suffered a sprain to his left ankle and a hairline fracture in his left foot and will not return for the remainder of the playoffs. However, the Rockets pounded the Lakers at the Toyota Center 87-99 Sunday.

Game six will be in Houston Thursday, and if game seven is necessary, it will be at Staples Sunday.