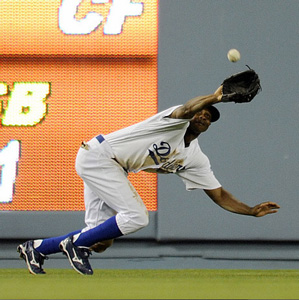 “In my experience chemistry comes after winning, rather than the other way around,” said Dodger manager Joe Torre May 3, only days before the news of Manny Ramirez’s 50-game suspension would shock the world of baseball. He was referring to the camaraderie felt among players on a ball club.

At the time, the Dodgers were riding high with the best record in baseball and an undefeated status at home. Since then, however, the subject of chemistry has taken on a whole other meaning.

Upon learning that Ramirez tested positive for a performance-enhancing drug Dodger fans across California were shook to their core. Some were angry, some were saddened. Some felt bitter resentment towards Ramirez, while others were overcome with compassion and concern. And some felt all these emotions at once.

Ramirez is a superstar unlike any other precisely because he doesn’t fit the mold. Whereas baseball fans generally demand players to pour their hearts into every play and every bat, Ramirez plays the game with an uncommon cool.

On the field, this attitude has been his Achilles’ heel, but at the plate with his relaxed and balanced stance, he is a wizard, hitting with astounding consistency. The long dreadlocks and the stories of his “misbehavior” back in Boston all played into the archetype of the rebel, the nonconformist.

Love him or hate him you can’t deny the man has stage presence. From the day he arrived in Los Angeles he has been a focal point for fans, reporters and the entire Dodger organization, which devoted a good part of their advertising campaign to the concept of “Mannywood.”

Long suffering Dodger fans looked to him like some kind of savior and even his teammates expressed starstruck “awe.” One can only imagine the pressure Ramirez was under to make good on the hopes and dreams of so many around him, an urgency to win at all costs.

Now we are shocked and dismayed, outraged and betrayed, yet there are things we may forget. Ramirez is human like the rest of us, just as capable as blowing it as any one of us. We can forgive him.

But before we do we must ask one more thing of him. He must come clean. To wear the Dodger white with any pride he must overcome his own pride. If he squares with the public about what he did and when, he can redeem himself yet. Nothing else will quite satisfy.

We will not be charmed by a cool attitude. There will be no good-natured jokes about Manny being Manny. We want the truth. It means a lot to us.

The Dodgers and their fans take pride in their organization as a class act. This is the team of Sandy Koufax, Jackie Robinson and Vin Scully, icons of professional dignity.

Ramirez has the opportunity to do what Barry Bonds and Roger Clemens couldn’t do: Apologize completely and tell us the truth. It would be bigger and greater than any home run he could ever hit. We are still rooting for him.

“We all make mistakes,” said owner Frank McCourt May 10 in an informal conversation with press. “It’s how we handle ourselves, how we try to make amends which makes the difference.”

McCourt went on: “The Dodgers are bigger than any one player, any one individual, myself included.”

It is well to point out that the other 24 Dodgers on the active roster comprise a pretty formidable group of ball players. If shaken by the news, they have regrouped and refocused as witnessed in the May 8-10 series against the second place Giants, when the Dodgers played three good games, while winning only one. Starting pitchers Chad Billingsley, Eric Stults and Jeff Weaver each put in solid performances with Stults throwing the Dodgers’ first complete game shutout of the season.

Veteran Juan Pierre has taken over responsibilities in left field and has done an outstanding job so far both defensively and offensively. He is hitting over .400 and has snagged flies Ramirez couldn’t dream of catching.

Known as the “hardest working guy” on the team, Pierre brings a quiet intensity along with two of the quickest feet in the game. There is a certain justice that the Manny debacle should give Pierre the well-deserved chance to be a starter.