Naya Rivera: Something to Cheer About 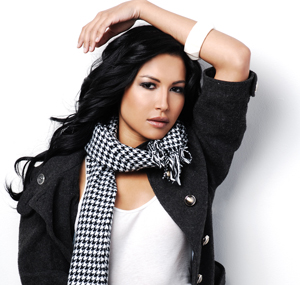 Coming soon to Fox, hoping to follow in the widespread, astounding success of “American Idol,” is a new series called “Glee,” about young, aspiring high school choir kids who just want to fit in and have fun.

Rivera is no newcomer to Hollywood life and showbiz; she has been singing, dancing and acting since a very young age, starting with a stint on a Kmart commercial when she was just a tot.

Feeling very comfortable on camera, Rivera states, “It’s all I know! As a child to now as a young adult, I’ve been going on auditions, growing up in this business. It’s definitely different how people see me at different stages of my life – kind of like starting all over again!”

Her latest project, “Glee,” centers around a high school glee club, a group of misfits who revive the choir club and make it more popular and socially correct. It incorporates all the typical cliques and genres of high schoolers, such as nerds, jocks and cheerleaders (that sing!), with the added drama and angst of adolescence. Rivera’s character, Santana, is one of the Cheerios, the high school cheerleaders.

A graduate of Valencia High in 2005, the high school experience is still pretty fresh to Rivera.

Thinking of her ensemble cast, Rivera says, “Everyone is so sweet. We all sing and dance and share a passion and interest in music.”

In addition to the show, Rivera recently dabbled with song demos – her favorite being a pop rock, edgy demo in the style of vocalist Pink.

With a bright, busy future ahead of her, Naya Rivera is truly one gleeful, gifted gal, whose fans will be singing her praises!