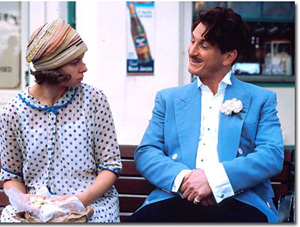 Samantha Morton and Sean Penn in Sweet and Lowdown.

NEW ORLEANS – Not long ago, about a month before the Spotted Cat bar on Frenchmen Street went out of business, the Panorama Jazz Band was swinging through a mix of Dixieland, klezmer, mento and gypsy jazz.

The band buffed little gems like “Don’t Touch Me Tomato,” and in the reflection, my mind drifted to scenes from the movie Sweet and Lowdown.

Written and directed by Woody Allen, himself a clarinetist, Sweet and Lowdown stars Sean Penn as a 1930s jazz guitarist haunted by the superior playing of Django Reinhardt.

Distributed by Sony Pictures Classics, the film’s soundtrack features many guitar solos by Howard Alden. For fans of “The Wire,” Chris Bauer – who played waterfront union boss Frank “Franoosh” Sobotka on the HBO series – has a cameo as a pool player named – naturally – Ace.

Penn plays Emmet Ray, a self-obsessed, buffoonish virtuoso who likes to shoot rats at the dump when he’s not emotionally torturing his mute girlfriend – played with a gentle, stubborn pathos by Samantha Morton – or playing music.

Upset upon discovering that she can’t speak after a Coney Island pick-up scene, Emmet whines: “I want a TALKING girl.”

A good line, but not as good as perhaps the best insight into a musician’s view of the world.

Playing a dilettante flapper – a role forever identified with Daisy Buchanan in The Great Gatsby – Uma Thurman asks Emmet what he thinks about when he is performing.

The guitarist answers: “... that I’m underpaid.”

Rafael Alvarez is a short story writer who can be reached at film@alvarezfiction.com