“Les 4 Saisons”: Simply to Have a Laugh 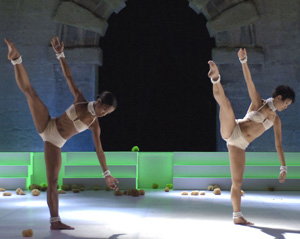 “Assailed by doubt” is how choreographer Angelin Preljocaj described his journey creating original dance to the music of “Four Seasons” by Antonio Vivaldi. The classic concerto is among the most famous and frequently played pieces of music. Preljocaj was intrigued by the challenge of finding something undiscovered in the material. “Les 4 Saisons,” which recently made a stop at UCLA’s Royce Hall, is the very interesting result of this effort.

Eschewing any attempt at straight narrative and even abandoning the traditional interpretation of the music representing seasonal weather changes, Preljocaj instead focused his attention on what he observed as four most recurring elemental themes in the score: bursting forth, exaltation, suspension and vibration.

The choreography, which supposedly represents these themes, is eclectic and carnivalesque. The scenes shift from serious and somber to irreverent and silly so many times it is almost difficult to distinguish one from the other.

There are moments of sublime beauty, as for example a scene involving two women, a man and a pair of masks. The dancers slowly maneuver around one another in a sort of play fight. This surprising and subtle piece was among the highlights of what is basically a string of bizarre vignettes.

A variety of dance techniques are mixed. There are enough pirouettes to justly call it ballet, but there is plenty of hip gyrations and playful creative movement to place it squarely in the modern dance camp as well.

The show suffers mostly from a lack of purpose. The self-induced challenge of balancing the sacred and profane proves too much. In the final analysis it seems the principal aim of “Saisons” is simply to have a laugh.

The set design by Fabrice Hyber is in cahoots with this endeavor. Large oversized objects hang from tracks above the stage, including drawings of clouds, lightning and the sun (at least a passing reference to weather patterns). A hanging Santa suit could suggest winter (who knows?).

Periodically the objects crash ungracefully to the floor of the stage. A bag of what appears to be breakfast cereal (in fact spongy tufts of foam) releases its contents, which disperse across the stage.

A creature appears wearing a suit of the same material. He proceeds to mock the achingly passionate movements of the “serious” dancer. A long cord of wound rope falls suddenly at which point the dancers engage in a spontaneous game similar to tug of rope, which turns into a game of jump rope with an interesting display of ballet technique in time with the swing of the rope.

The dancers appear to be having a great time on stage as they poke fun at themselves and the seriousness of professional dance. Yet it feels contrived at times, and the audience is not always willing to sit through their merrymaking.

Preljocaj finds in Vivaldi’s score much to celebrate, but precious little to ruminate upon with any profundity. “Saisons” is fun but at last, frivolous.

As for Vivaldi’s music it remains a fantastic concerto, and yet its full power is lost when recorded and replayed over a sound system. Perhaps a live orchestra would help give the show the freshness “Saisons” seeks.