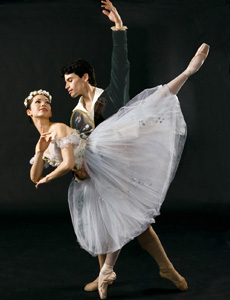 “La Sylphide,” one of the world’s oldest surviving Romantic ballets as well as one of the least performed, will be presented by the Los Angeles Ballet for a very limited run. The ballet, set in a fantastical Scottish town, is a full-length story ballet complete with two acts, and combines Romantic storytelling, unrequited love, death, betrayal, flying sylphs, witches, magic and so much more.

“La Sylphide” will delight audiences with plot, dancing and costumes, and is a performance not to be missed, even for those slightly skeptical about the charm of ballet. The ballet will be performed May 23 at 7:30 p.m. and May 24 at 2 p.m. at UCLA’s Freud Playhouse, in addition to a performance at the Alex Theatre in Glendale May 30 at 7:30 p.m. For more information, visit losangelesballet.org.

May 20, from 7 a.m.-10 p.m., head over to the UCLA campus and take part in the annual UCLA Clothesline Project. The project, which promotes awareness about rape and violence against women, features a T-shirt display where sexual violence survivors can express their feelings and pain through the creation of works of art from regular T-shirts.

The T-shirts are not limited to the survivors themselves, but also include designs by survivors’ significant others who have directly experienced the effects of sexual violence. Admission is free and open to the public.

If you’re searching for a fresh batch of theater to fill up your day, or love the idea of wide-eyed newcomers breaking onto the stage for their big debut, then Act III Theatre Ensemble’s Freshman Showcase is just what you’ve been looking for. May 22, from 1 p.m.-10 p.m., freshman members of the ensemble will take part in readings, dramatic and musical performances in UCLA’s Kerckhoff Hall Grand Salon.

All productions by Act III Theatre Ensemble, the newest theater group on campus, are completely student produced, directed and cast, and the group is dedicated to providing quality theater to the student body while giving students the chance to prepare their craft on a professional level.

Under Construction, a festival which showcases plays by the three graduating playwrights of the M.F.A. in Dramatic Writing program, will present “Harvest,” a play set in World War II about a farm girl and a German soldier who fall in love in an American POW camp. Written by Forrest Hartl and directed by Michael Arabian, the play follows Elsa, a young girl whose family accepts a German prisoner, Otto, to help out on their farm, as she enters into a secret and forbidden romance with the soldier.

The play will be performed May 26 and 29 at 8 p.m. in the McClintock Building on campus. Admission is free and available at the door on a first-come, first-served basis.