Dance Flick: Humor to Help You Get Your Groove Back 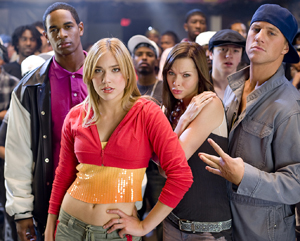 Some of the cast members from Dance Flick.
(Credit: Glen Wilson)

By now, you’ve seen the trailer: a breakdancing baby, a teen mom leaving her kid in her locker while she chides people with bad parenting skills and a smattering of laugh-out-loud racial jokes. Mmm, mmm, mmm, boys and girls … I smell a Wayans family movie.

This American humor dynasty (or as I like to call them, “The Kennedys of Comedy”) is back with its latest spoof called Dance Flick. The movie is a direct send-up of all those body-shaking movies you’ve come to know and love, with a particular focus on 2001’s Save the Last Dance.

Still, other movies are not exempt from being worked over. There are even jokes at the expense of blockbusters like Hairspray as well as the Step Up franchise.

Spearheading the action for Dance Flick is Damien Dante Wayans. He directs his cousin, Damon Wayans Jr. (Thomas), as well as newcomer Shoshana Bush (Megan) in what could possible be the funniest of the family’s efforts. For the director, this movie was a long time coming.

“I’m one of those cats that loved [Breakin’ 2:] Electric Boogaloo back in the day,” says Damien.

But he’s also quick to add that he wasn’t necessarily a major devotee of the choreography-laden genre.

“I’m a fan [of dance movies] to the point that it gave me material to make this movie,” he jokes.

He feels that part of the winning formula of Dance Flick is that he was able to really relate to his cast.

“For me, I’m very hands-on because I’m an actor as well. I like to call myself ‘an actor’s director.’”

There was also plenty of familial guidance given from the elder statesmen of this world-famous brood. Each Wayans is known for his or her own type of comedy, as Damien explains.

“The advice you get from Keenan may be different from Damon or from Kim. At the end of the day, we are all individuals.”

However, for all the singularity within the filmmaker’s bloodline, there have been some very gracious parallels drawn between Bush and another Wayans family muse: Anna Faris. Bush couldn’t be more thrilled.

“I think Anna’s amazing!” she says.

As for the intense dance moves and physical comedy within the film, Bush sank her teeth into the role of Megan. The cast was sent to Millennium Dance Complex, where they trained in ballet, hip-hop and tap styles.

But the actress admits that her favorite types of dance within the movie are a little more risqué.

“I had a really good time breakdancing,” she says. “I also had a good time pole dancing.”

OK, so comedy can make a girl do some freaky things. But for this actress, she’s strictly channeling the zany, take-no-prisoners approach laid down by one of her idols.

“I actually really love Lucille Ball,” Bush confesses. “I’ve been collecting ‘I Love Lucy’ episodes. Even though it was done in the ’50s, it’s still funny.”

Ball’s posthumous tutelage may have even helped during one pivotal scene in which Bush endured a classic comedy stunt, ad nauseum.

“There was a time when I had to get a pie in my face and they kept missing,” she says, laughing. “Finally, they landed it, and everybody started laughing.”

In the end, however, Bush is able to look past the amusing script, its gifted creators and the lighthearted mood of the movie to find a genuine soul lurking within.

“I think [my character] changes throughout the movie. Even though it’s a parody, there are lifelong lessons to be learned.”

And as for Wayans, he’s sure it’ll give moviegoers the chance to “just laugh and have a good time.”

Dance Flick releases in theaters May 22.