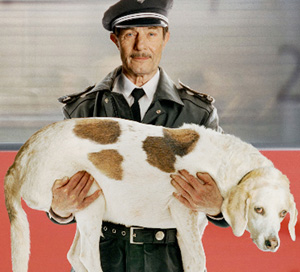 I always watch with interest any time something changes in an elder person’s life. They say you can’t teach an old dog new tricks, so what happens when you lose a life mate after half a century of marriage, or retire from an occupation you’ve held since your early 20s?

O’ Horton follows the retired character Odd Horton (Baard Owe) at just this juncture in his life, as he finishes his final day as a Norwegian train conductor. His eyes patiently observing the rushing tracks, the changing landscapes of his final shift. Next thing he knows, it’s over, and Odd’s time is his own.

The rest of the story, which occurs somewhat episodically, details Odd more or less exploring, following his nose from one loosely connected scene to the next. It occasionally slips from endearing charm into simply meandering, but not without some moments that’ll stick with you after you leave the theater.

The tone of O’ Horton is very quiet – aurally, and also in its pacing – but that doesn’t mean it’s not beaming with things to say about, well, the human experience from the perspective of someone who’s lived it. And it’s completely refreshing that our typically silent protagonist isn’t only a cipher, but in his unassuming way he’s looking at the world like it’s brand new and constantly saying yes to every surprise it offers.

For those unaccustomed or averse to reading little words at the bottom of the screen while they’re nibbling popcorn, O’ Horten is actually an agreeable way to go about it – set in a stark, snow-covered Norway, the thing plays out with minimal dialogue and great attention to interesting set pieces. In a way, O’ Horton embodies a very pure spirit of the cinema – show it, don’t say it – while managing to keep the quirkiness turned up and the performances warmly realistic.

It’s odd indeed to watch a grown man bumble through so many misadventures with such an easy, restrained wisdom. The story has fun flirting with magical realism – several scenes call to mind the low key charm and occasional absurdity of Fellini pictures, such as Amarcord – but it’s certainly always still warm and relatable.