Xtreme: "On the Verge" 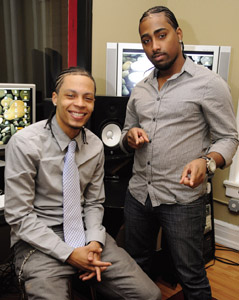 “There are a lot of things about Xtreme that people don’t know,” admits Danny Mejia, member of Latin bachata duo Xtreme.

The two have signed on with mun2 for a reality program called “Xtreme: On the Verge.” Mun2 is a lifestyle cable network for bicultural Latinos 18-34, and it can be watched on channel 144 on Time Warner Cable.

Xtreme is composed of Mejia and Tejada, both based in the Bronx, N.Y.

“It is great living in New York,” Mejia says. “There a lot of humble people, even though many think it is crazy. New York never sleeps, and there are a whole bunch of things happening.”

The duo was nominated for two Billboard Latin Music Awards and have had hit after hit, especially the R&B bachata genre. “Shorty, Shorty,” “Te Extrano” (I Miss You) and “Through That Window” are some of their more well known songs.

They are currently promoting their new single, “Lloro y Lloro” (I Cry and Cry), that is found on Chapter Dos (Chapter Two), their latest album.

Both 23-year-olds highlight their individual and group lives on the show. “Xtreme: On the Verge” projects a unique and intimate feeling to the audience. It has both drama and hilarious comedy, showcased during scenes of personal life that include interviews, shows, hitting traffic in the Big Apple, business issues, studio time and charming fans.

“This is just us in the show. Everything just happened,” Mejia says.

“It is something real natural that comes from us,” Tejada clarifies. “We are very fun people to be around.”