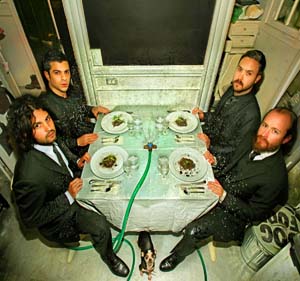 The amount of sound that comes from a band is generally measurable. You can get a feel for their limits after hearing a CD. The ability of the drummer and his relationship to the bassist, how the guitar leads the songs and what kind of rhythm is established will pave the way for the vocals; you can feel the power of the band’s music.

The Dredg experience is one that can’t be measured in the length of a single album or one show. Over the past years this quartet from Los Gatos, Calif. has been putting out what most call “experimental” or “concept” albums that bring the listener into their world of sound and story.

Their newest venture into music, The Pariah, the Parrot, the Delusion, follows the same path in taking listeners to a place where they can open up and educate their minds.

“This is our finest piece of work,” comments vocalist and songwriter Gavin Hayes.

His confidence in his work isn’t without warrant. “Information” is a blend of serious lyrics and a sound that hasn’t been on the airwaves in a while. The music flows effortlessly through the track. And thankfully the video is shot clean and simple, so you can see what these guys are doing to create this sound.

Drummer Dino Campanella brings his percussion skills out in full force to tie this song together, but it’s his ability to play piano while laying down a steady beat at the same time that makes this song special. Guitarist Mark Engles and bassist Drew Roulette lay down their strings in an aggressive orchestral wall of music to push the song forward. And this is just the first glimpse into their new record.

Taking the music a step further is the lyrical substance of the album.

“It’s about life, and a lot of it comes from the essay by Salman Rushdie, ‘Letter to the 6 Billionth Person,’” adds Hayes. “After reading it, it really summed up things, and a lot of this new album reflects his views in the essay.”

The essay is an open letter challenging the role of religion as rule, and freedom of thought as the truest form of human expression. A short read that will not only give you insight into this groundbreaking act, but it might shed some light into your own soul.

Now that this band is free of a major label, it has formed its own means of supporting their music with Ohlone Recordings.

“We left Interscope and are doing the same things we did before, but our way,” says Hayes.

In addition to putting out the LP, the band will also have a limited edition vinyl and special edition CD featuring alternate art worthy of any fan’s collection.

Filtering all of this into one sound is what the band does best, and the only way to truly understand what Dredg has become, is to see them live.

The Pariah, the Parrot, the Delusion will be available June 9. Dredg will perform May 22 and 23 at the Troubadour. For more information, visit dredg.com.