The Tender Box: Getting to Know Joey Medina and Chuck Gil 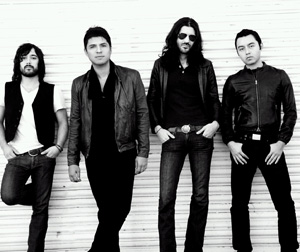 Formed by four friends from South Gate, the Tender Box have amassed quite a fanbase – one that includes Perez Hilton. The blogging diva has said: “Every once in a while we discover a singer or a band that just makes us flip our shit.

This is one of those times!”

Since 2007’s The Score, the band has headlined local nights like Club Moscow and Hang the DJs and is set to release the five-song EP 1 later this month/early June to advance their full-length sophomore effort due in the fall.

Vocalist/guitarist Joey Medina and drummer Chuck Gil share some of their L.A. favorites with Campus Circle.

Joey Medina: I do most of my record buying online these days, but in a “brick-and-mortar” sense I would definitely have to say Amoeba [6400 Sunset Blvd., Hollywood].

First rock show you ever attended in Los Angeles:

JM: Kula Shaker was definitely one of the first bands I can say and I got to witness ROCK at the Viper Room! Thank goodness for my fake ID. I otherwise would have missed a night that would change my life forever.

Place to shop for instruments:

JM: I always thought of Guitar Center [7425 Sunset Blvd., Hollywood] as the Toys“R”Us for musicians. Most musicians never really grow up, do they?

JM: I usually hit the ArcLight [6360 W. Sunset Blvd., Hollywood] right after going to Amoeba. It’s right across the street.

Where to grab some food after playing a show:

CG: Thai food is good too.

Meal to eat before playing a show:

JM: A beer or two usually sets my mood!

Special place to go for inspiration when you’re writing songs:

JM: I usually get inspired by going to places I’ve never been to or have not been to in quite a while. Perhaps I should take a trip around the world before completing our next project?

What you want people to take away from your performances:

JM: A night that will change the rest of their lives forever!

The Tender Box will perform May 21 at the Roxy. For more information, visit myspace.com/tenderbox.