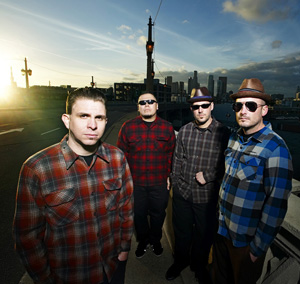 Hellcat is ready to release another batch of “dirty reggae” from one of Los Angeles’ favorite rock-steady bands, the Aggrolites. The quintet didn’t exactly stretch their imaginations thinking up a name for their fourth release; it’s called The Aggrolites IV. But according to singer Jesse Wagner the band did expand their musical horizons a bit on the generous 21-song offering.

The Aggrolites are currently in the midst of a tour that took them to Brazil for the first time, and they’ll also be debuting in Japan later this summer. The Aggrolites IV drops June 9, and the next area gig for the band is at Brixton South Bay in Redondo Beach June 6.

New Shoes for Tegan and Sara

Feel like stepping out with Tegan and Sara? Earlier this year the Macbeth Footwear company released two new pairs of custom high-top Nolans that were designed individually by Tegan and Sara. The kicks quickly sold out, but Macbeth is whipping up another batch that will be available soon.

The Tegan “Nolan” is constructed from black denim and features a hand-drawn wave on the outer ankle accompanied by the initials “TRQ” for Tegan Rain Quin on the inner ankle. The Sara “Nolan” is made from white denim and contains a large artistic “S” on the outer ankle and the initials “SKQ” for Sara Kiersten Quin on the inner ankle.

The twins are currently in the studio with Death Cab for Cutie’s Chris Walla working on their next album, and they’ll also open for Death Cab when they appear at the Hollywood Bowl July 5.

Geffen has just released two collections of Buddy Holly material to the delight of fans of early rock ’n’ roll. The Memorial Collection is a triple-disc set with famous cuts like “Peggy Sue,” “Rave On” and “Oh Boy” along with 57 other songs including lots of undubbed versions of tunes like “Holly Hop” and “Smokey Joe’s Café.”

Aficionados will want to bring home Down the Line-Rarities, a double-disc, 88-cut collection of obscure tunes, alternate takes, undubbed versions and song fragments. The collections have been issued in conjunction with the 50th anniversary of the plane crash that killed Holly and other rock stars of the era, Richie Valens and the Big Bopper.