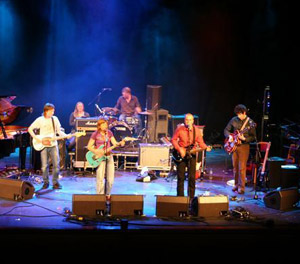 Reformed for now and visiting Los Angeles for the very first time, Glasgow’s Frances McKee and Eugene Kelly played a couple of new songs to balance out a brief set of goodies from their equally brief late-’80s catalogue. McKee sweetly delivered all sorts of filth – 10 p.m.’s never too early for muff, and yes, we could use a wank about now – while Kelly, actually quite handsome 20 years later, sans all that hair, played modest. They’ve aged well and sounded quite close to their recordings, though even McKee had trouble delivering the “man/boy” chant of “You Think You’re a Man” without giggling.

But the set ended on a high note, with an encore consisting of “Rory Rides Me Raw,” “You Think You’re a Man” and “Son of a Gun.” New lyrics let us know that they’ve got nothing to say, but they’re saying it anyway – not that anything’s changed, of course. Luckily, there’s a small following that still gets the joke.