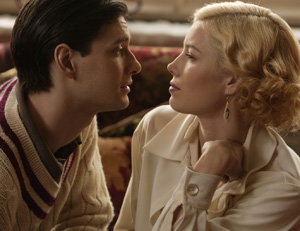 What do Noël Coward, Alfred Hitchcock and a writing team with a penchant for singing drag queens have in common?

They’ve all tried their hand at Easy Virtue, a property that enters its third incarnation this week with co-writer and director Stephan Elliott (The Adventures of Priscilla, Queen of the Desert) at the helm.

Written in 1925, Easy Virtue was one of Coward’s early works. In 1928, it was adapted from a play into a silent film by Hitchcock, which is ironic since Coward was known as “The Master of Wit,” something difficult to convey in silence.

Elliott and his longtime writing partner Sheridan Jobbins created a postmodern film set in the 1920s, infused with a bawdy Cole Porter attitude and freckled with semi-contemporary music and a fierce feminist spirit.

The film presented the monumental task of walking in the footsteps of both Coward and Hitchcock, a potentially daunting proposal, which Elliott and Jobbins saw as a chance to reinvigorate the material.

“He was 24-years-old when he wrote this,” Elliott continues, “and he wrote it for young people. He wanted it live and fresh and, at the time, it was pretty hip and modern. So we have to do the same thing.”

Coward also admitted in his autobiography that he felt the material had structural problems and was part of his growth period as a writer.

“That was a license for us,” Elliott grins.

Rather than treating the source work as sanctified, they decided to rewrite it in the style of later, more formed Coward, while giving it an infusion of modern relevance for a contemporary audience, something they felt the author would have done as well.

Addressing the hovering ghost of Hitchcock was handled similarly by Elliott.

“Hitch was in the same boat,” he says. “It was like student film. He didn’t know what he was doing, and he was doing a silent film of Noël Coward words. You can’t do that. There are moments where you can see the beginning of Hitchcock, but it’s just beginning, he’s not there yet. So, for me, I said, ‘How would the older Hitchcock, Hitchcock in his prime, have addressed it visually?’”

Initially Elliott was dubious of taking on the project, insisting, “Period films are not my bag. They will put me to sleep.”

But he and Jobbins soon realized they were dealing with an eerie mirror to current events.

“The times are so similar,” Jobbins says, her voice weighted. “The late ’20s, coming out of a very devastating war that was both unpopular and had lasting effects, into a recession that ends in a shocking depression, changing tax laws that mean people are losing their houses; these are the times the play were set in and the echo of that now …”

What Easy Virtue is not as akin to, however, is the movie that has imprinted Elliott’s career: 1994’s Priscilla, Queen of the Desert.

Interviews
James Bond producer: 007 ‘can be of any color’ but never a woman
280 views