Bring On the Nuggets: Los Angeles vs. Denver in the West Finals 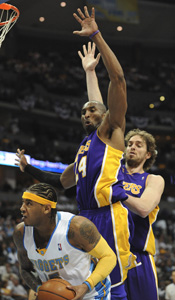 After finally making it past the Houston Rockets by blowing them out in game seven, the Lakers face their most formidable foes in the west, the Nuggets. Denver, who advance to their first conference since 1985, held the No. 2 seed (at 54-28) behind Los Angeles. The Nuggets beat both the seventh seed Hornets (in the first round) and sixth seed Mavericks (in the second round) in five games on their way to the Western Conference Finals.

The Lakers were 3-1 against the Nuggets during the regular season, winning both home games and splitting the match-ups in Denver. However, the Lakers cannot afford to bring anything less than their A-game every single time against the tough Nuggets squad led by Carmelo Anthony and Chauncey Billups.

Game two against the Nuggets will be Thursday at Staples. Games three and four will be in Denver Saturday and Monday. The Lakers should be able to make it past Denver to the Championship Finals in six.