A Pierre For Your Thoughts 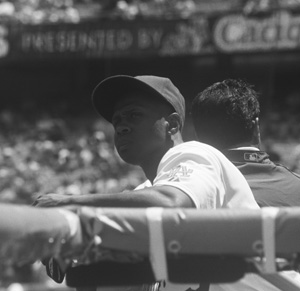 When Juan Pierre showed up early to Spring Training this year, his prospects for earning a starting spot in the lineup looked pretty slim. The Dodgers were actively trying to sign Manny Ramirez and had already expressed confidence in the youthful Matt Kemp and Andre Ethier as the other probable starting outfielders.

As negotiations over Ramirez’s contract dragged on, Pierre was given the opportunity to start in left field and bat leadoff during the first month of exhibition play. In that time Pierre brought such intensity onto the field that by watching him you would have thought every game was the seventh of the World Series.

Alas, when Manny Ramirez finally signed, it seemed Pierre would have to resign himself to the role of a utility player. There was even talk of a possible trade, and Pierre’s agent was given permission to investigate the interest of other teams.

And yet the god of baseball (if you can believe in such things) works in mysterious ways. With the sudden suspension of Ramirez for 50 games, it is once again Pierre gracing the meadow in left field.

And how has he fared? In a word: brilliant.

In the first nine games since the suspension went into effect, Pierre hit for an astonishing .464 average and made plays in the outfield that boggle the imagination.

“We have a different look with [Pierre] in the lineup,” manager Joe Torre tells a group of reporters.

It may be the understatement of the year.

Indeed, Pierre and Ramirez are almost completely different, in appearance, personality and style of play. Whereas Ramirez is known for his playful and relaxed temperament, Pierre is quiet and intense. Whereas Ramirez hits for power and rarely steals bases, Pierre hasn’t hit a ball over the fence in two years yet will steal a base every chance he gets. Ramirez is the one with the long dreadlocks and baggy uniform two sizes too big, while Pierre can be spotted in his signature high knee socks and a cap worn tight and low on the brow so that his ears stick out. The one thing the two players share in common is a tremendous love of the game.

Come July, when Ramirez makes his return to the club, Torre may have a big decision to make. If Pierre continues to play as well as he has, the god of baseball may not forgive sitting him on the bench (if you can believe in such things).