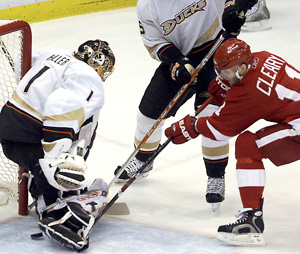 While it would’ve been nice to see this match-up in the NHL’s Western Conference Finals, Anaheim’s low playoff seeding translated into a second-round date against the Detroit Red Wings. As the league’s previous two champions, was anyone truly surprised the best-of-seven series lasted, well, seven games?

Rhetorical questions aside, it was fitting for the Ducks and Wings to meet at some point in this year’s edition of the Stanley Cup Playoffs. After all, it was Anaheim who defeated Detroit in the Western Conference finals en route to claiming the league title in 2007. Now, it was up to the Wings to return the favor in their attempt to maintain ownership of Lord Stanley’s Cup for at least one more year.

In what appears to be a budding rivalry between a thriving suburban gateway to Southern California’s brass and dying urban icon of America’s muscular past, the Ducks and Wings threw out their respective playoff rankings and skated it out until one team could skate no more.

Fittingly, that one team happened to be the Anaheim Ducks. Oh, how the “Mighty” have fallen.

Actually, the mighty fight on. No offense to hockey fans here in Southern California, but if sports leagues want to continue to grow economically perhaps it is best for the Ducks to enjoy moderate playoff success instead of actually hanging Stanley Cup banners from the rafters. Just leave the winning to teams like Detroit.

In today’s profit-driven, television-revenue, corporate sponsorship-saturated market, the teams left standing at the end of each season dictate whether or not their respective leagues will remain standing at the start of the next season. In the NHL, where revenue generation is essential for the league to survive in its post-lockout era, it was essential for Detroit to advance into the conference finals, much to Anaheim’s behest.

At the expense of sounding arrogant, there are certain traditional/big-market teams who carry the rest of the league, bringing in top dollar and national recognition. Without these teams, there just is not the money or exposure for the rest of the league to survive long-term. More often than not, these are teams based in major media markets.

In baseball, those teams are the New York Yankees, Boston Red Sox and perhaps Los Angeles Dodgers. The NBA has the Los Angeles Lakers and Boston Celtics. Of course, in the NFL, iconic teams include the Dallas Cowboys and Pittsburgh Steelers, who are tussling for the title of “America’s Team.”

Sure, it is great to sometimes see teams like the Ducks win the Stanley Cup or the Arizona Cardinals almost win the Super Bowl. Of course, many basketball fans nationwide would tune into an NBA Finals featuring the Cleveland Cavaliers, thanks to LeBron James.

It is because of performances like these fan interest remains high and the veil of purity of sport maintains itself. Obviously, if teams such as the Wings, Lakers, Yankees and Cowboys won titles each year, the rest of the country would lose interest in sport. So, yeah, we need some of the “smaller” or “non-traditional” markets to step up here and there.

Yet, end of the day, the NHL just does not profit enough from Anaheim as it does from Detroit. Sure, a potential Anaheim-Carolina Stanley Cup would have been great for Raleigh and Anaheim, but outside of those two cities, who would have watched?

Truth be told, the NHL is probably secretly rooting for a rematch of last year’s Detroit-Pittsburgh Stanley Cup Final or another rematch of the 1992 Stanley Cup between Chicago and Pittsburgh.

Yet Carolina, just like Anaheim, is the odd team out in NHL’s 2009 Final Four. Being a non-traditional hockey market, Raleigh just does not have enough marketing power to draw a national television audience.

For example, in 2007, the NBA Finals had a record-low for television ratings (6.2 rating/11 share for games televised on ABC), even though it featured a classy team such as the San Antonio Spurs defeating an up-start team (Cleveland Cavaliers) with a fan-favorite budding superstar (LeBron James). Conversely, since ABC began televising the NBA Finals in 2003, only once did its ratings hit double digits – in 2004, when the Lakers lost to the Detroit Pistons.

Also in 2007, when Anaheim squared off with Ottawa in the Stanley Cup Final, the NHL hit an all-time low with a 1.6 rating and three share for games three through five, which were all nationally televised on NBC.

Between 2003 and 2007, with Detroit failing to make the Stanley Cup Final each of those years, the championship series had steadily declining ratings of 2.9 for New Jersey versus Anaheim, 2.6 for Tampa Bay versus Calgary, 2.3 for Carolina versus Edmonton and 1.6 for Anaheim versus Ottawa. Last season, when Detroit returned to the Stanley Cup Final to face-off against Pittsburgh, ratings doubled to 3.2.

Even the Stanley Cup Finals not featuring Detroit were headlined by other “traditional” hockey teams, such as New Jersey versus Dallas in 2000 (3.7 rating) and Colorado versus Florida in 1996 (3.6 rating). Dallas maintained a strong following from the upper Midwest due to its roots in Minneapolis, while Colorado moved from Quebec, a traditional hockey market, just one season before defeating Florida in the 1996 championship series.

End of the day, while it is nice to see teams like Anaheim, Edmonton, Carolina, Ottawa, even Tampa Bay qualify for the Stanley Cup Final, it is the league’s more traditional markets that win championships with more consistency.

While Anaheim is in the unique position to associate itself with the Los Angeles market, it is American teams such as Detroit and Pittsburgh or Canadian teams such as Toronto and Montreal who will give the NHL an opportunity to have a chance to earn profits large enough to benefit the league as a whole.