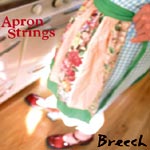 After releasing a CD in 1999, Breech was strapped for cash to put towards another album. So the indie rock five-piece turned to the baking talents of smoky-voiced lead singer Missy Gibson. Through sales of cookies, cakes, and breads outside various music venues, the band raised $7,000. The result of that hard work——aptly titled Apron Strings——is the epitome of persistence and creativity. In honor of the unconventional extremes it took to bring this album to fruition, each track is carefully crafted, hard-hitting, and uncompromising. Throughout every song, Breech exhibits the two faces of rock and roll: dark, pained soulfulness and determined resilience. Gibson's voice is a delectable purr, at once vulnerable and threatening, in a way similar to Fiona Apple or Billie Holiday. In "Curtains," she sings, "Spare me indecision/ I am not a flower nor a kitten," while in "Lilywhite," she says, "I fastened you to my weak bones/ Without you I may break." This juxtaposition of strength and needlessness with pure human frailty is woven throughout each song. Gibson's voice is matched by instrumental prowess, and the result is musical intoxication and a surreal trance that takes the listener to all-to-real emotional depths. Grade: A
Article posted on 6/17/2004
This article has been viewed 1460 times.