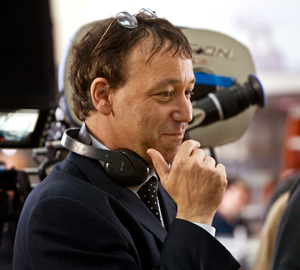 Sam Raimi on the set of Drag Me to Hell
(Credit: Melissa Moseley)

He is the immensely talented director of the Spider-Man movies. However, what most people don’t know about Sam Raimi could fill a book.

The filmmaker has brought to the big screen a number of interesting, out-of-the-box productions such as The Evil Dead and Darkman (starring Liam Neeson). Many know and love his signature style of canted angles and blink-before-you-miss-it action.

Raimi has also been instrumental in propelling a number of performers into major success. In 1995, he worked with a young actor by the name of Leonardo DiCaprio who later went on to huge international success. He also took a guy by the name of Tobey McGuire under his wing and made him one of the biggest names in show business.

Raimi’s magic touch has now been cast on his latest film, Drag Me to Hell.

The movie stars Alison Lohman (White Oleander) as Christine Brown. She’s a career-savvy loan officer with a loving and handsome boyfriend – a professor named Clay – played by Justin Long (He’s Just Not That Into You).

Everything’s going well for the couple, until one day, drama strikes. When an old lady comes into the bank to get an extension on a loan to keep her home, Christine has a moral dilemma. Does she let granny keep her place or boot her out in order to impress her boss?

Well, Christine chooses to oust the woman, setting the stage for some frightening revenge. A curse is placed on Christine, making her everyday life a living nightmare. What’s more, her boyfriend thinks she’s looney tunes. What else can Christine do but try to get to the bottom of the curse and all the black magic that will surely consume her life if she doesn’t act fast.

Raimi put a lot of time and attention into crafting the original script for Drag Me to Hell. He called upon his brother, Ivan, who helped him create the first draft of the screenplay over a decade ago. The brothers delved deep into all kinds of lore, basing the curse on the demonic Lamia.

This force is present in all kinds of ancient stories, with one major consistency: “The one thing the legends have in common is that the Lamia is a demon that when awoken in anger, drags its victims down to hell screaming,” says Ivan Raimi.

The brothers knew that in order to make the film believable, the audience would need to see the progression of chaos in Christine’s life. That’s why Lohman appears in nearly every scene within the film. Both are extremely happy with their leading lady’s performance, especially the director.

“Alison has a great humanity to her,” says Raimi. “She really is somebody that you watch on screen and you care about. Because this character is somebody I wanted the audience to identify with, it was very important to have Alison in the role. Christine is somebody that the audience understands and is easily with at the beginning of the film.”

For Long, his part was one that hit close to home.

“My dad’s a philosophy professor, and he’s very rational – very stoic and logical,” admits the actor. “He comes from the school of thought that there’s an explanation for everything. I had to tap into somebody who is just a bit more right-brained in their thinking.”

Long also admits to loving the gorier moments of movie, even though his character wasn’t present for some of them.

“It’s a strange desire when you find yourself oddly jealous that somebody gets to have maggots thrown up on them,” he says.

Drag Me to Hell releases in theaters May 29.