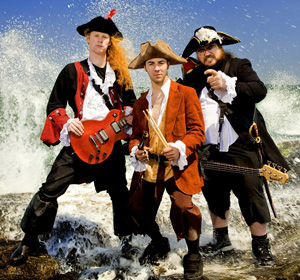 Yarr! From the mighty shores of New Jersey comes the tale of a crew of pirate metallers who go by the name of Swashbuckle. If you thought the Garden State was only good for the pun, “You mean, the Garbage State?,” think again.

Comprised of Admiral Nobeard on vocals and bass, Commodore RedRum on guitar and Captain Crashride on drums, this crew is hell-bent on heisting some loot and conquesting every metalhead’s ears.

“I have a very weird mindset, and I come up with brilliant stories of our high seas hijinks,” remarks frontman Admiral NoBeard at their recent appearance at Paganfest.

When this blessed crew isn’t battling the rough seas or entertaining as the opening band audiences hardly ever see when they go to a gig, they’re on their boat sailing and drinking rum (of the Captain Morgan and Sailor Jerry varieties) and chronicling their battles at sea.

“I’m really into goofy stories and playing really fast, aggressive music,” claims NoBeard (who ironically has a monster beard). “Pirates are usually in and out looting and pillaging really fast, so why not set it to fast-paced music?”

Many an eye has read their scroll and deemed this crew a mere gimmick band, but that does not faze them in the least.

“We came to terms with it when we started,” NoBeard rambles. “You can’t avoid the whole title or slag of it. If kids don’t appreciate it, then good for them, they can have their Pink, but the kids who do … more power to them.”

With two precious loots under their belts, 2006’s Crewed by the Damned and this year’s follow-up Back to the Noose, Swashbuckle are set to conquer rougher seas and better slots on upcoming tours.

“We’re just a punch in the face for people who don’t expect it,” remarks NoBeard of their opening band status. “In New Jersey most of the time we’ve played basements or bars.”

“We’re not discouraged when only 40 or 50 people [show up,]” NoBeard continues. “I feel like we can still be an opening band, you could throw us in the middle … as far as headlining goes, I don’t feel we’re at that point yet.”

If the thought of a humble pirate baffles you, peer deeper into the depths of their influential crews: Anthrax, Megadeth, Testament and any old school New York hardcore band, just to name a few.

Swashbuckle even commissions the ghost of ’70s metal icon King Diamond for lyrical and conceptual ideas.

“I love King Diamond. I love what he does with stories and how he interacts with the music,” claims NoBeard. “We sort of went in that direction. We wanted more of a concept, and we did that on the interludes.”

The fabled interludes NoBeard rambles about are found in the treasure chest of Back to the Noose. Featuring 21 grogs, this treasure is full of laughs, headbang-inducing moments and replete with enough “Yarrs!” for a new Pirates of the Caribbean sequel. With amusing titles like, “Cloudy with a Chance of Piracy,” “Peg-Leg Stomp” or “We Sunk Our Battleship,” it’s hard to not love this crew.

The fantasy of their plunders is mirrored by the reality of the violence occurring in the Indian Ocean with Somali pirates.

“We don’t support what they do,” NoBeard exclaims. “They’re doing it because they don’t have a government who can control their piracy.”

“As for us, we’ll invite them along for a minute, we’ll steal their shit and run them through! We will fight the Somali pirates! Their M-16s be damned. We have canons!” NoBeard says.

If the concept of Swashbuckle vs. Somali pirates for their next album isn’t pleasing to the ear, you can walk the plank!

Back to the Noose will be available Aug. 11. For more information, visit swashbuckle.info.