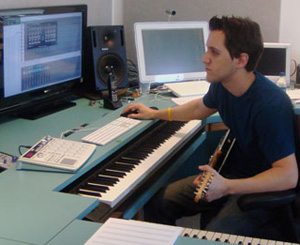 Jason T. Miller at work in the studio

A UCLA graduate and former student of the Musicians Institute’s Encore Program, Jason T. Miller composes music for TV shows and is currently collaborating with the Taxi Project. Most notably, Miller has worked with Kanye West, co-writing and producing “Good Night” as a bonus track on Graduation, and with Keyshia Cole, co-writing “This Is Us” for her A Different Me album. Here, the budding producer shares his L.A. favorites with Campus Circle.

Record store: It’s 2009; what’s a record store? (frowns) Well, I used to love going to Tower Records to pick up music, magazines and mini-figurines of rock-stars and “The Simpsons” characters, but now I usually go to Amoeba in Hollywood [6400 Sunset Blvd., Hollywood]. It’s a great place, and you’ll surely find new stuff you never would’ve thought of getting off of the Internet music stores.

First concert: The Counting Crows for their album August and Everything After at the Greek Theatre [2700 N. Vermont Ave., Los Angeles], which is still one of the coolest places to see a show. It’s beautiful there!

Venue: See No. 2! Being in the pit for a Brian Setzer Orchestra show is always a blast at the Greek. It’s not a real small place, but still feels intimate, and the surroundings are gorgeous.

Club/bar: For live music, you can’t beat the Hotel Café [1623 1/2 N. Cahuenga Blvd., Hollywood]. They get great up-and-coming acts, as well as the occasional big-name artist. It’s also in the heart of Hollywood, so there’s all kinds of cool places around there to hear more music or just hang out.

Bookstore: I’d love to say I read enough to frequent bookstores … The last book I bought was off Amazon.com, and it was a collection of interviews with big producers. But for a store, if there’s a place I can read a magazine while also purchasing some sort of dessert-type concoction while people are stressing-out studying for the LSAT all around me, I’m content.

Movie theater: I used to love going to the drive-in with my family growing up, but can you actually find me a drive-in? I was just at the Westside Pavilion movie theater [The Landmark, 10850 W. Pico Blvd., West Los Angeles], and it was quite the pleasant movie-going experience. A fantastic snack bar …

Place to hangout in your free time: These days it’s anywhere I can spend time with my niece. She’s almost two, and she’s more fun than anyone or anything I know (And she likes the guitar!).

But if I had to pick an actual place, you can’t beat getting together with a bunch of your friends and spending two hours at a Souplantation [souplantation.com]. You tell yourself you’re eating healthy, because there’s a huge salad bar, but after my salad with fat-free dressing, I get chili, soup, pasta, pizza and a brownie topped with ice cream. That’s good living!

Most memorable collaboration so far: I feel fortunate to say there have been a few that I really enjoyed; namely being able to collaborate with my dad Bruce Miller on various TV shows and songs. But working with Kanye West was a trip.

A rapper I was producing and writing with called me up one afternoon and said, “Kanye likes our song ‘Good Night.’ Bring the Pro-Tools session and come get me. We’re going to the Record Plant to see him.”

So we walked in, and Kanye was working on Common’s album. Everyone was real cool, and it was a kick seeing him work and comparing our techniques in the studio. He told me he wanted to work with our track, and the next thing I know it was on his Graduation album as the iTunes and international release bonus track.

Do you do anything special to get psyched up before heading into the studio to work on an album? I really don’t find myself needing to do anything. I’d say I’m excited enough about the artists I’m working with and songs we do that I’m pumped as soon as we start working. It’s making music; people often listen to music to get psyched up. So it would make sense that when you work in music you should be psyched up all the time!