Ghostbusters III and the Internet 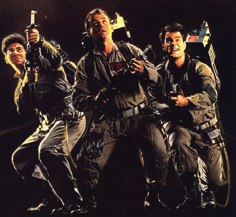 The Ghostbusters return for another round.

I’ve been apprehensive to write about this because I haven’t been sure how realistic a possibility it was that this was going to happen (and technically, it still isn’t definite), but I believe it has the potential to be something special. Maybe. It also has the potential to be downright offensively bad, but I always prefer to stay positive. I’m referring to the long-gestating Ghostbusters III project that was talked about for a long time but never was actually made.

Now, 20 years after Ghostbusters II came out, there is some actual movement with the project. Apparently, most of the original cast members are onboard if the new film happens, including Bill Murray, Dan Aykroyd, Harold Ramis, Ernie Hudson and Sigourney Weaver. The only one not returning would be Rick Moranis, who has permanently retired from acting.

The word is that Ivan Reitman, who directed the first two, might not return to direct this one, and two of the writers from “The Office,” who also wrote the script for Year One (the film Harold Ramis just directed starring Jack Black), are writing the script for Ghostbusters III. Aykroyd has been quoted saying that this film will be a “passing of the torch” to a new team of Ghostbusters who will take over, and of course you know what that means: new franchise.

The first two Ghostbusters movies were made in a different era of film – an era where the majority of films weren’t disappointing. When older films get redone, rebooted or re-energized, they usually end up sucking really bad. It seems to me that the only times that these situations work out is when a really great fresh up and coming filmmaker takes the reins of an older franchise and breathes new life into it (i.e. Batman, Star Trek).

Personally, I’d rather not see Jack Black, Ben Stiller or whoever replacing the original cast members, but that’s just me. I don’t know how seriously this film is going to be taken by the studio and filmmakers, but if they mess this up, they will have blood on their hands.

Does the Internet spoil the moviegoing experience?

I love the Internet as much as the next man. However, I can’t help feeling like the Internet spoils a little bit of the moviegoing experience.

Remember when you’d be really excited to go to the movies to see the previews because that’s the only place you could find out what new movies were coming out? You’d be sitting in your seat and Batman would crash through a skylight and you’d be like, “Whoa! A new Batman movie! No way!”

Now everybody knows just about every detail about every movie and can even see whole sections of the movie before it comes out. We’re so used to knowing so much about films from the moment the studios are considering doing them that when we see the preview we already have judgments and criticisms ready for them. Maybe it’s not the films that suck, maybe it’s us.

When the first trailer for Batman starring Michael Keaton and Jack Nicholson came out, the only place you could see it was in the theater, so people actually bought tickets for the film that it was showing in front of just to see the trailer once, leaving the audience salivating for more.

The wonder of film is lost on us because we’re saturated with so much of it at all times. Unfortunately, the effects of the Internet are here to stay, and this is something that will most likely never change.

However, it doesn’t change the need for better films. In today’s age where people have a lot of time to prepare their judgments and criticisms about your film as they re-watch the trailer a million times on their iPod, it’s that much more important that when they actually go see it (or illegally download it), their minds are blown by how awesome it is.