All Tied Up: Lakers/Nuggets Series Even at 2-2 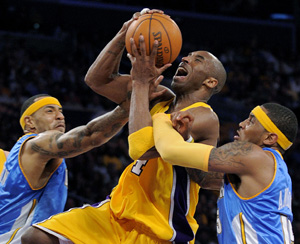 While LeBron James undoubtedly had the shot of the holiday weekend Friday night in Cleveland – sinking a three in the last second of game two of the Eastern Conference Finals for the win – things were just as exciting in the west. After tying up the western finals series at one game apiece Thursday, the Nuggets hosted the Lakers at Pepsi Center Saturday.

It was a night of too many missed free throws for Los Angeles, who shot only 69 percent from the charity stripe, but the team pulled through with a 103-97 win. Pau Gasol took leadership reins for most of the game, tallying 20 points and 11 boards. Kobe Bryant made a resounding 3-pointer over J.R. Smith with 1:09 left and sunk four free throws in the final 22 seconds (He ended up with 41 points.).

Although he had to head back into the locker room for a few minutes in the third quarter due to hip and groin pain, Trevor Ariza returned early in the fourth and made another final-minute big steal (reminiscent of the inbounds pass he stole in game one).

After the logistical showdown with the WWE, who ended up moving “Monday Night Raw” to Staples, game four was off to a pretty slow start Monday evening in Denver. The Nuggets’ Carmelo Anthony, suffering from stomach problems, missed his first eight shots from the field. Bryant had nine points, while the rest of the Lakers combined for just 10 in the first quarter.

The Nuggets were able maintain the lead throughout the game, and three by Smith with two minutes left in the game cemented Denver’s 120-101 win to tie the series at two games each. Game five will be Wednesday in Los Angeles, and game six will be in Denver Friday. If necessary, game seven will take place back at Staples Sunday.