In Need of a Win 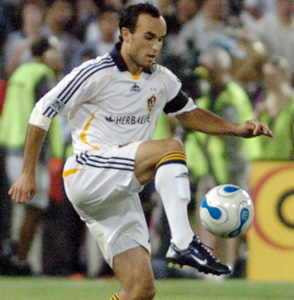 Going into Texas, the Los Angeles Galaxy were indeed in search of a win.

The squad did not accomplish that as it recorded a 1-1 draw at FC Dallas Saturday.

Los Angeles improved to 1-1-8 with a total of 11 points for the season thus far. They now sit in a fifth-place tie with Real Salt Lake.

Galaxy’s star striker Landon Donovan gave the visitors an early advantage in the third minute, but FC Dallas’ Drew Moor netted a score in the 31st minute. The match would eventually end just like that.

Donovan’s goal was his 16th against FC Dallas in his career and his sixth score of the year.

The Galaxy will now face the Kansas City Wizards at the Home Depot Center Saturday, May 30 at 7:30 p.m.