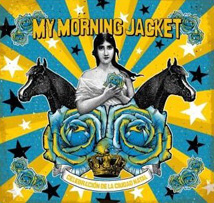 This is the EP that MMJ put out in conjunction with this year’s Record Store Day, and the album is only available at independent record stores. It was recorded live at two venues in the band’s hometown of Louisville, Ky., and one of those venues was the group’s favorite local record store, Ear-X-Tacy, wherein is created just a little bit of a problem.

After opening with “Evil Urges” from their last album and then playing the Prince-meets-Primus jam “Highly Suspicious,” singer Jim James launches into a rambling monologue about how the band loves Ear-X-Tacy that should have been edited out of the recording or at least edited down to a quick shout-out.

That one hit of the “skip” button aside, fans should otherwise dig this collectible that also features “Gideon,” “Where to Begin,” “Librarian,” “Phone Went West” and the lengthy Neil Young-like guitar burner “Dondante.”