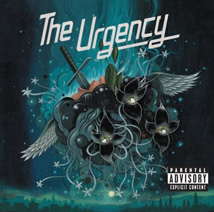 This five-piece band has its roots in Vermont, but they are by no means a laid back outfit or a jam band (Hey, they call themselves the Urgency!). After spending years trying to find a satisfactory vocalist, they enlisted the help of Tyler Gurwicz, and their sound gelled enough for them to cut this debut album.

An experienced ear will note at the very beginning of the first song, “Fingertips,” that Gurwicz has a voice and singing style that sounds an awful lot like a young Sting, and the band in turn has patterned many of their arrangements after those pioneered by the Police. And while the Urgency is proficient, overall most of these songs miss the mark by a small margin.

“Rooftops” has a decent hook and the other hallmarks of a Police hit –soaring vocals and an insistent (yes, urgent) beat augmented by showy drum fills – but tunes like “Hot Damn!” and “Crimes” make it all too obvious that the guys are intent on cloning the Police, and those efforts probably hold back the creativity a bit.

Still the potential is easy to hear through the idol worship; the Urgency may soon be cranking out multi-platinum hits.


The Urgency is currently available.
Article posted on 5/28/2009
This article has been viewed 1377 times.